While the struggle continues over the future of the Church of the Assumption in Callowhill, another distinctive religious building appears to have a much brighter horizon. The Emanuel Evangelical Lutheran Church in South Philadelphia is in the midst of growing from its German roots into a Vietnamese Buddhist temple.  Continue reading….

Kimpton Hotels and Restaurants of San Francisco plans a second outpost in Philadelphia: a Monaco hotel at the historic Lafayette Building at Fifth and Chestnut Streets.  Continue reading….

A goodly number of the 176 buildings designed by gilded-age architect Theophilus Parsons Chandler, Jr. are no longer with us. But in its Chandler Collection, The Athenaeum of Philadelphia has 177 drawings, 1,400 photographs, 255 books and a shelf groaning under the weight of manuscripts. Does having a great archive mean you don’t really need to worry about preservation? Does knowledge somehow forgive a missing urge to preserve? Or does documentation make losses all the more painful? Continue reading….

That people on van Pelt are willing to give up space to bump elbows with the rich and famous should not be surprising: after all, that’s the premise behind Rittenhouse high-rises. Beginning in the 1920s, apartment towers rose all around Rittenhouse Square, blotting out the spires of the Church of the Holy Trinity from the skyline completely. Continue reading….

Tube Tuesday: A Place to Live

Of the thousands of historic church buildings in Philadelphia, only a small fraction are listed on the Philadelphia Register. St Rita’s is just one of the hundreds that could be but isn’t. A gleaming, swirling terra cotta temple that looks plucked from an opera stage, the church is an apt face for these masses of undocumented landmarks yearning to stay standing.   Though it’s not the largest or oldest or grandest, it was built as a shrine to Rita of Cascia, the patron saint of lost and impossible causes.  And while the future of this particular church, thanks to a healthy and well-funded congregation, seems forseeably safe in spite of its unlisted status, the future of hundreds of others is far more troubling.

Big old churches citywide are fighting against time, gravity, leaky roofs, and dwindling congregations.  And mostly they are losing.  The recent plight of the Church of the Assumption drives the point home– landmark status alone cannot ensure the future of these buildings that so define the skylines and streetscapes of our neighborhoods.  “Saving” these churches just by landmarking them is like trying to pound a nail with a screwdriver.  Unlike factories, another increasingly obsolescent building type we have in spades, churches are usually easier to demolish than repurpose, and even “protected” churches like Assumption are no match for the wrecker’s backhoe when the economics of preservation are not immediately, blatantly, even obscenely, obvious to those left holding the keys.

But if a screwdriver is all you have, swinging it is better than doing nothing. The Church of the Assumption would already be a surface lot if it hadn’t been listed on the Philadelphia Register in 2009. Plenty of others are now landfill because there was no legal mechanism to postpone or prevent their demolition. Along with a good roof and a little patience, listing on the Philadelphia Register can help today’s Assumption or Bonaventure or Boniface or Saint Peter be tomorrow’s Baptist Temple.

But back to Rita.  In addition to being the patron saint of lost causes, she’s also the patron saint of baseball.  So if you happen to be heading south on the orange line for any reason, especially, say, on your way to Citizens Bank Park, you may want to tip your cap at the Ellsworth-Federal stop. You’ll be sitting under a shrine that’s been keeping its end of the bargain in the good architecture department and the good baseball department.  A little recognition is in order.

The plan to reef the historic Cruiser Olympia off the coast of Cape May calls for a party – a giant party! Thirty ships on review, 21-gun salutes, international dignitaries, fireworks and 4 million people on the waterfront. Continue reading….

Save Our Sites (SOS), a city preservation group, has issued its 2010 list of endangered buildings, streets, and other sites in Philadelphia that face destruction, neglect, or possible demolition. Continue reading….

What’s the most Philadelphia of all things Philadelphian? Once upon a time, it came down to a contest between the Mummers and the Orchestra. And a very brief contest it was. Continue reading….

Variations on a Theme II: Hands Across Philadelphia

Around Philly, a fourth-generation business built on building (Philadelphia Inquirer, 10/3/10)

It’s a playful version of I Dare You: Name any neighborhood or town around Philadelphia, and 86-year-old Charles Kahn Jr. will show you how, over a century, his family has left its mark there.  Continue reading….

Former farmland sprouted rowhomes and duplexes in Northeast Philadelphia during the post-war housing and baby boom. But a century before, the area was a bucolic retreat for some of Philadelphia’s most affluent citizens, and a few remarkable estates survived the wave of suburban development. Continue reading….

From bank building to billiards club and beyond (1200bank.com)

The restoration of 1200 Chestnut Street, Philadelphia, a long-vacant landmark building to its former grandeur, has begun. The plans retain the building’s historic beauty, while adding a touch of “now.”  Continue reading…

Pennsylvania Station at 30th Street is one of the greatest monuments of Beaux Arts classicism in Philadelphia. Louis Kahn insisted that every visitor to the city enter through this monument (rather than by car or airplane). Continue reading….

Extending across most of the southwestern quarter of Center City and encompassing examples of the built environment from the Civil War straight through to current construction, Rittenhouse-Fitler is one of Philadelphia’s most visible historic neighborhoods.  Continue reading here and here….

When we last left the massive redoubt of the old granary at 20th and Callowhill Streets, Pearl Properties was proposing to scale its great turreted roof with a thrilling, though problematic, design for an apartment tower. But because the former grain silo is a certified landmark, the Historical Commission rightly poured hot oil on the idea.  Continue reading….

The Preservation Alliance for Greater Philadelphia 2010 Citywide Conference is right around the corner, but there’s still time to secure a spot. A Sense of Place: Preserving Philadelphia’s Neighborhoods will take place on Friday, October 8, 2010 from 8:30 AM – 3:30 PM at the Temple University, Student Faculty Center, 3340 N. Broad Street, Philadelphia, PA. The conference fee is $20 and includes lunch.

Neighborhood organizations and leaders from throughout Philadelphia are invited to convene for this one-day conference focusing on historic preservation in neighborhoods. Participants will have the opportunity to expand their understanding of the important role of preservation in neighborhood stabilization/revitalization, learn about successful examples from local communities and meet with representatives of the non-profit and governmental organizations that are playing an active role in these efforts.

Its insides are all but gutted and its exterior still looks forlorn. But there is an energy buzzing around the long-embattled Bouvier Building these days. Continue reading….

The influence of the French Second Empire style was initiated by Napoleon III’s post-revolutionary campaign to rebuild Paris with majestic public buildings and boulevards.  Continue reading….

Fixing a hole in a landmark (Philadelphia Inquirer, 9/30/10)

Nipper has lost his head but not his patience. In a beautiful but broken set of stained-glass windows high above the heart of Camden, parts of the vintage RCA-Victor mascot still await His Master’s Voice. Continue reading….

The last time renovators operated on the Friends Center, located on 1.26 acres in downtown Philadelphia, it was 1974 and crews were putting the finishing touches on a 56,000-square-foot office building abutting the Race Street Meetinghouse.  Continue reading….

Maybe it’s the Mad Men-crazed moment we’re in, but I’m starting to find inspiration in advertisements. My current favorite is one from Patek Philippe, a watch so frightfully expensive, it gets to call itself a timepiece. Beneath a soft-focus photograph of a handsome father beaming at his young son, the copy tells us, “You never actually own a Patek Philippe. You merely look after it for the next generation.”  Continue reading…. 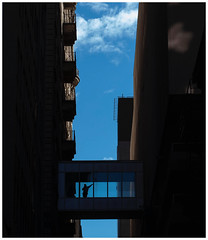 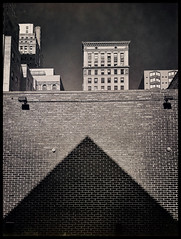 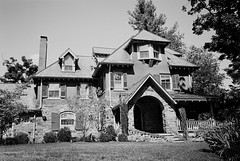